I am the one wearing the costume. I was inspired by Erza Scarlet from the anime Fairy Tail. I wanted to do recreate one of her armors that she wears but also wanted to make something very challenging. 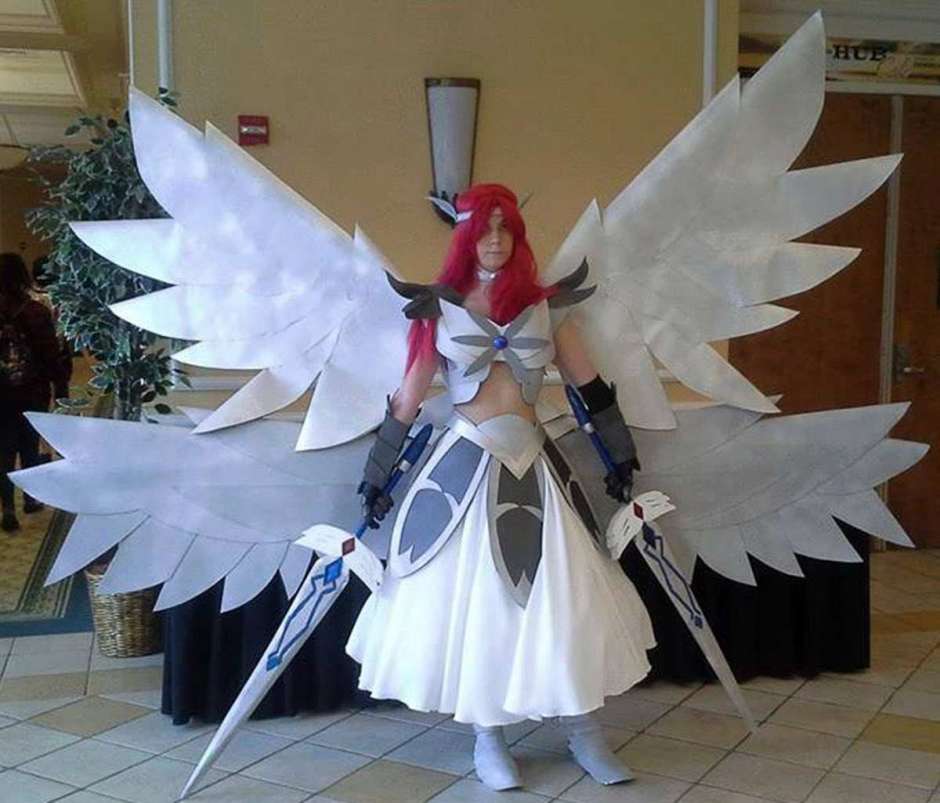 The gauntlets were made using made up patterns and a historical gauntlet pattern and all the parts were assembled on top of a pair of black costume gloves.

The skirt was made by draping fabric over an old petticoat that I altered to give it a certain shape and poofyness. The waist/belt piece was a piece of plastic sheeting (the kind of stuff you line a shower with) and cut to the shape so it fits on my hips with no extra attachments. The petal like panels were layered craft foam sheets and attached to the waist/belt piece via velcro.

The boots were made using another historical sabbaton pattern and layered onto top of a pair of boots that fit me already.

The swords were made all out of wood with the handles attached separately. The hilt was made with layering more craft foam and then carved to achieve the shape you see in the photo. The gem pieces were gems I found at a craft store and painted with nail polish. The blade of the sword was cut out a plank of wood and then I used a wood carving plane to make it look like it had a sharpened edge to it.

The wings were the biggest challenge of this whole costume. I needed to make them easy to take off and put on as well as make them able for being packed away for travel or storage. First I took my bra and sewed a second set of heavy duty straps into the bra to support any possible large amount of weight the wings might have. I then used various lightweight plumbing pipes and cupplings so I can make each wing piece disattach each other. I made the main part of what the wings attach to by using the thickest craft foam I could find covered in the worbla and then secured the main holder piece for the wings with various glues and resin soaked wraps. I made a smaller version of my wings to find a layout that I liked most and then scaled it upwards onto sheets of craft foam for the bottom set of wings and poster board (the stuff you use for school projects, signs and presentations) because I needed the wings to be SUEPR lightweight since my shoulders would be supporting all of the main weight of the wings. I also added a 2nd clasp to keep the wings from accidentally tipping foward from being bumped into.

The final width of the wingspan on the costume is 11ft wide and the top of the wings reach roughly 7ft high. And the overall weight of the wings is maybe 5lbs and I can last several hours in the costume before it becomes cumbersome to wear due to people not realizing how wide I really am.

Erza Scarlet Costume from Fairy Tail submitted by Nadine B.