We came up with our family costume “Toy Story” because my two year old loves Buzz Lightyear. So our creativity went from there. My husband, Mark is “Woody”. His shirt belt cover and hat were bought since I didn’t have enough time to make them but his vest I made from scratch no pattern. With cow fabric that I had to double side because it was a thin 100% fabric and trimmed with white rope. 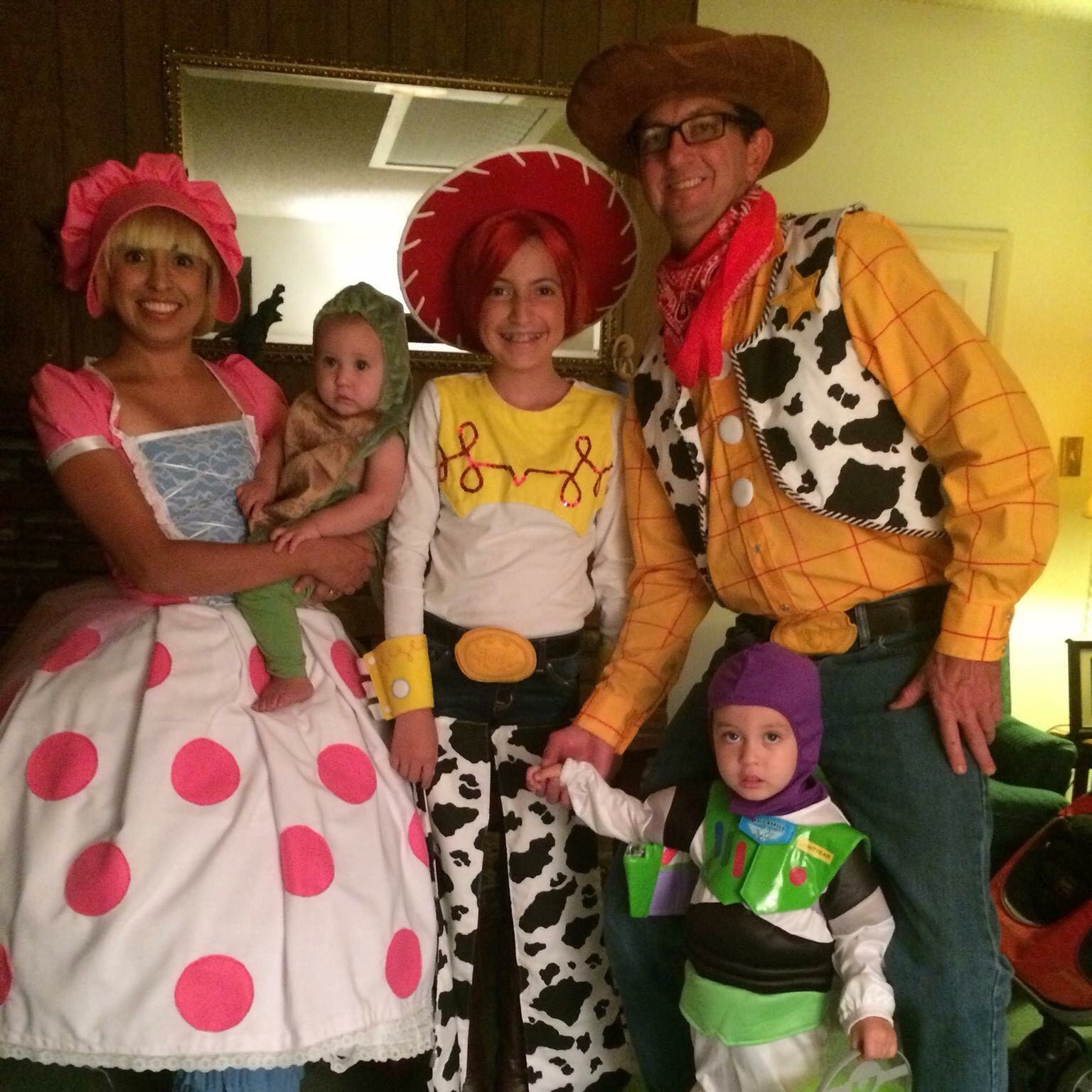 For the “Jesse” costume is my 11 year old daughter Briana. Her costume was really fun to make. I got her jeans and measured the length for the cow skins. Since the fabric is the same as Woody’s vest I doubled the fabric as well and added a fringe on the bottom outer sides. For the shirt I got a simple white shirt measured the yellow fabric and cut out the shape based on the cartoon. The red design is a red sequence that I pinned on before hand sewing so it layed right. Then I sewed it on the shirt. The cuff links, hat, wig, and belt cover were bought. Both my boys costumes were store bought to make “Rex” and “Buzz”. My costume was “Bo Peep”. That costume is completely DIY with no pattern since I couldn’t find one and took 3 weeks to make. The bonnet was the easiest the head piece started as a circle, half was gathered for elastic and the other half was gathered for the brim part of the bonnet. That part was shaped with two fabrics and interfacing in between then sewn with the hat. The skirt took two weeks because I couldn’t get the shape to lay on the pedicoat perfectly. The pedicoat was bought on Amazon and was floor length but was measured and cut shorter since there was none the perfect size. I also tightened the bonening on the last ring to make it look more like a bell shape. Once the shape was right I cup out felt circles from a can and placed them and pinned them on so they lay like it does on the movie. Those were all sewn on. I also had to make a underskirt because the white fabric was heavy and see through (you can see the bonining on the pedicoat) I added lace on it to look more feminine). I then sewed the mesh half top skirt and started on the bodice. With a light blue fabric I put a lace that I got to closest resemble the same fabric and tube string and pinned it on and sewed that (its separate piece) then I did the back which is a lot higher then the front. Made sides in pink and sewed all top pieces together the hard part was attaching them together and adding the zipper. There was a light blue leg pedicoat that went under it took two tries to make it look decent but after the added strips gathered and layered on the bottom of the leggings it came out decent. All in all with three kids, school, Girl Scouts, dance, shows and practice it took a month to make in my spare time but it was way with it. The kids got a kick out of them and we had many compliments going trick or treating