This is a photo of my husband and I (before we were married). We create the costume ourselves. Finding playground balls to use as the base proved very difficult in October, since most stores had already put away their summer toys. We were determined, however, and found what we needed. We used recycled 2 liter bottle caps as “nipples” which we glued to the playground ball base. (“Is it cold in here?”) Most impressively, my husband is the one who sewed all of the black lace to the trim of the “bra” part. In hindsight, that must have been the moment I knew he was the one. 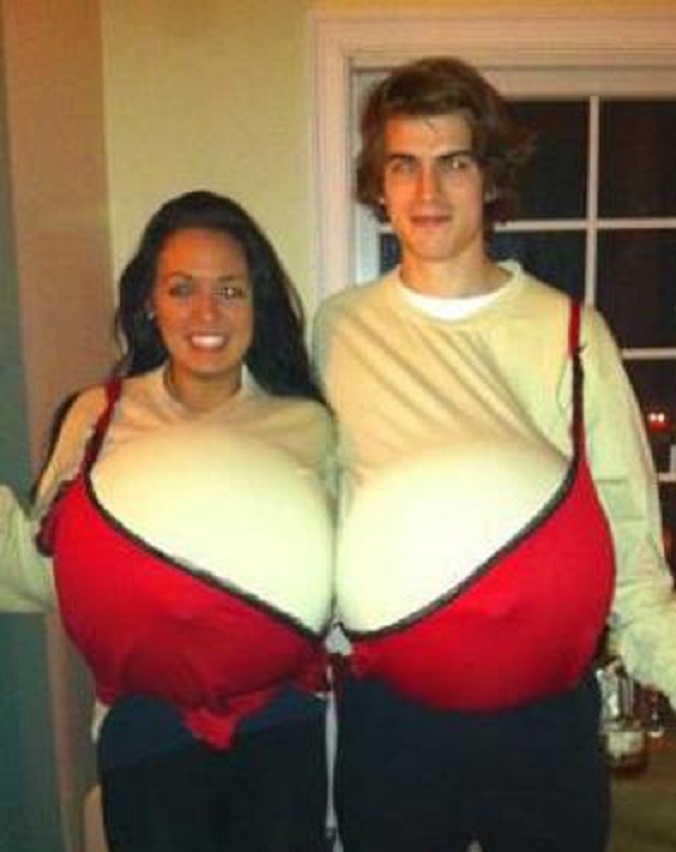 Throughout the night we’d here “Nice Rack!” and “What a boob!” To which , of course, we’d reply “We’re UP HERE” and point to our eyes. Whenever we were found individually, people would always look at us strange. “What are you supposed to be?” However, when we were together, it was clear….we were a pair, we were a team, we were a set of boobs.

We entered two costume contests that year, and got SECOND place at BOTH! The first one was at a charity event, and a pair of pirates (store-bought costumes) got first place. Everyone came up to us to tell us that we should have won. The second contest was at a coworker’s Halloween party. The winner was dressed as Osama Bin Laden. It was 2014, so in my opinion, this was a dated reference and we should have won 🙂

Hopefully we get our redemption with this contest!

P.S. It’s PERFECTLY NORMAL for one to be bigger than the other!!