These are the Voldemort and Bellatrix couples costumes I made for my husband (then boyfriend) and myself for our first Halloween together in 2012 when we wore them into Salem. 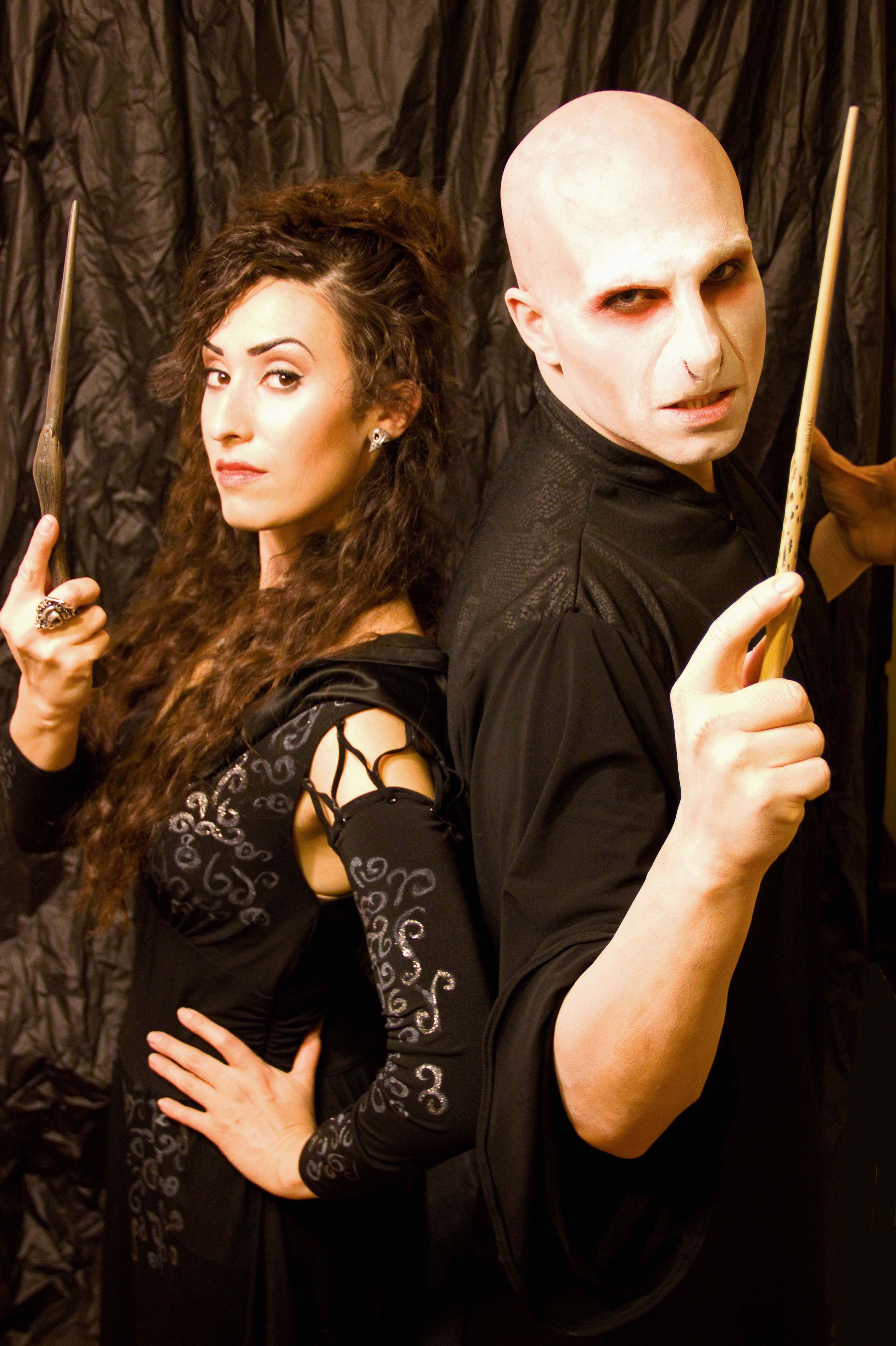 I made my Bellatrix costume awhile before we’d met to use at anime conventions and added to it over time to make it more complete. I purchased the black dress base at Goodwill for around $6 and re-cut the neckline to make it lower; sliced apart the sleeves and added every grommet by hand around the shoulders and up the arm seams to corset the lacings. I also hand-painted the silver swirl pattern onto the dress based on screen shots from the movie and using close-ups of the character’s costume designs from a book on the making of the Harry Potter films. This is also where I found the best shots of her bird skull jewelry which I made from Polymer clay and finished with metallic acrylic paint and sealed with a clear gloss.

I added a pointed hood made from scrap material and finished with accessories of a faux leather corset belt from Rainbow, a serpent ring purchased from a street cart and my own Victorian-style black boots. I used the official Bellatrix replica wand that I bought at Harry Potter World in Orlando to finish the look. I was growing my hair out to donate to a cancer organization at the time so I had enough length to use for Bellatrix: I set it in small braids overnight, then teased it for texture and rolled the top portion around some hair batting and pinned it in place.

My husband hasn’t had hair since he was a teenager, so he just had to shave his goatee and mustache for Voldemort. I painted his face, neck and arms with white cake makeup and blue and red creams for the veins on the head. I used red cream makeup and black eye shadow for the glowing red look around the eyes and set everything with translucent powder and a makeup fixative spray used to waterproof theatre makeup. The eyebrow/nose prosthetic was custom-molded for him by a friend and run in silicone for durability. I struggled with applying it due to it’s weight and thick edges, but using lots of spirit gum and some liquid latex to blend the edges, we ended up with a pretty good effect- especially from the profile! To finish off the look, I fit the black robes right on my husband from a mixture of solid black and snakeskin-patterned materials to pay homage to Voldemort being the Heir of Slytherin. His wand is the official Voldemort replica wand which we ordered from Amazon.

My favorite part about these costumes is how instantly recognizable they were, especially my husband as Voldemort, so that when we walked the streets of Salem, he got calls of recognition and admiration wherever we went! He’s wonderful at getting into character, waving his wand menacingly and playing into the evil side.

Salem was the perfect setting for these evil wizard and witch costumes from the Harry Potter book and movie series and we had so much fun wearing them that we can’t wait to do it again! 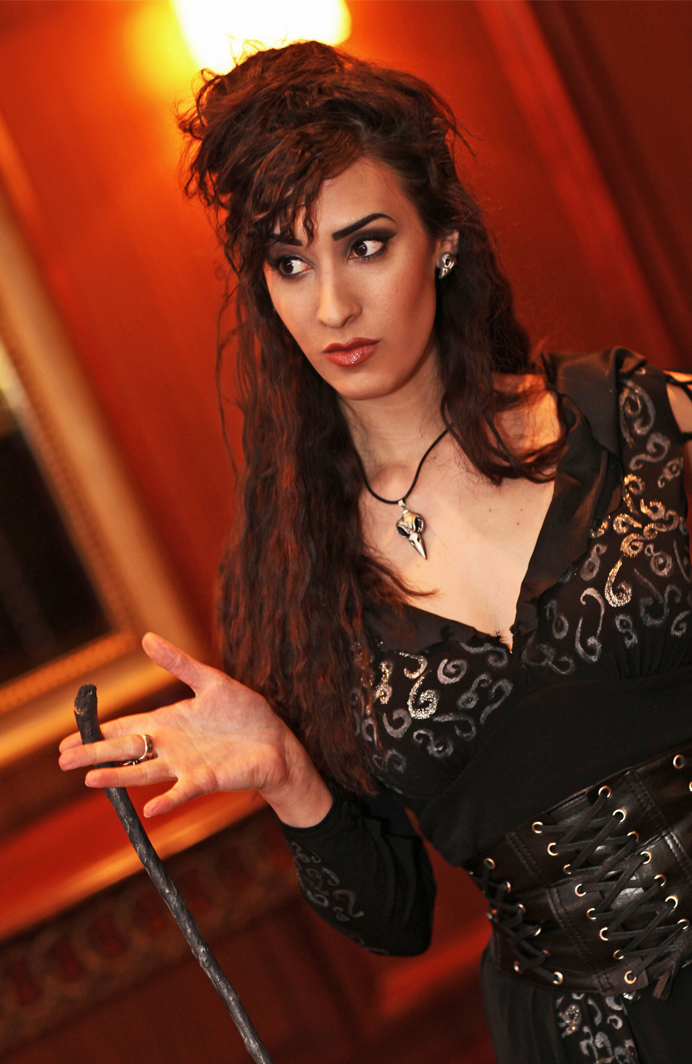 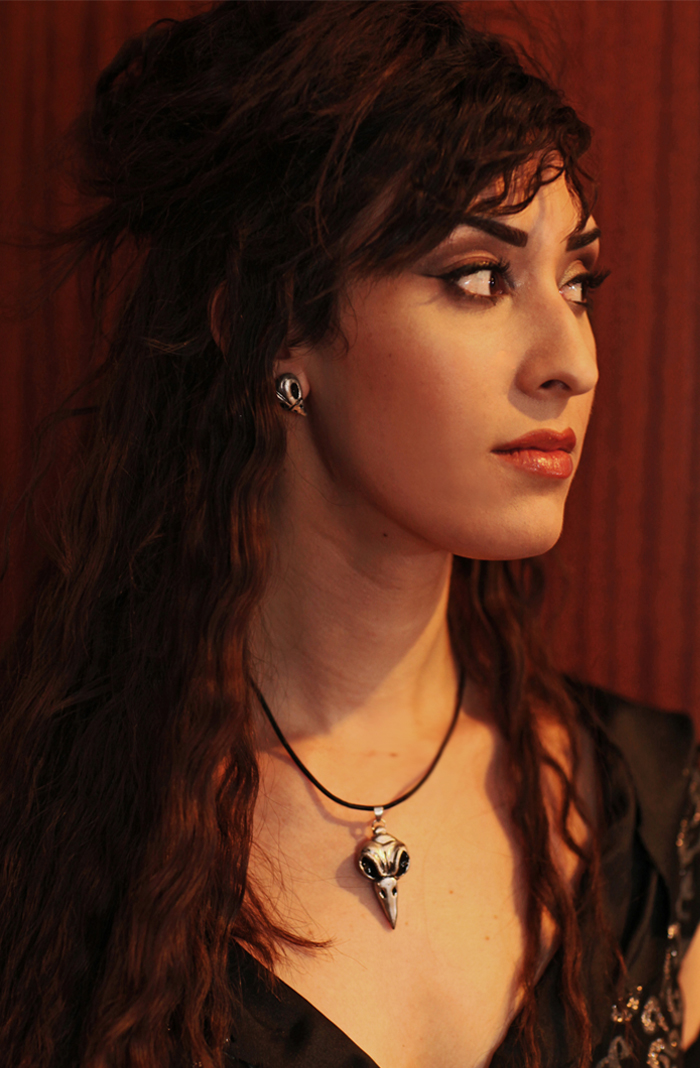 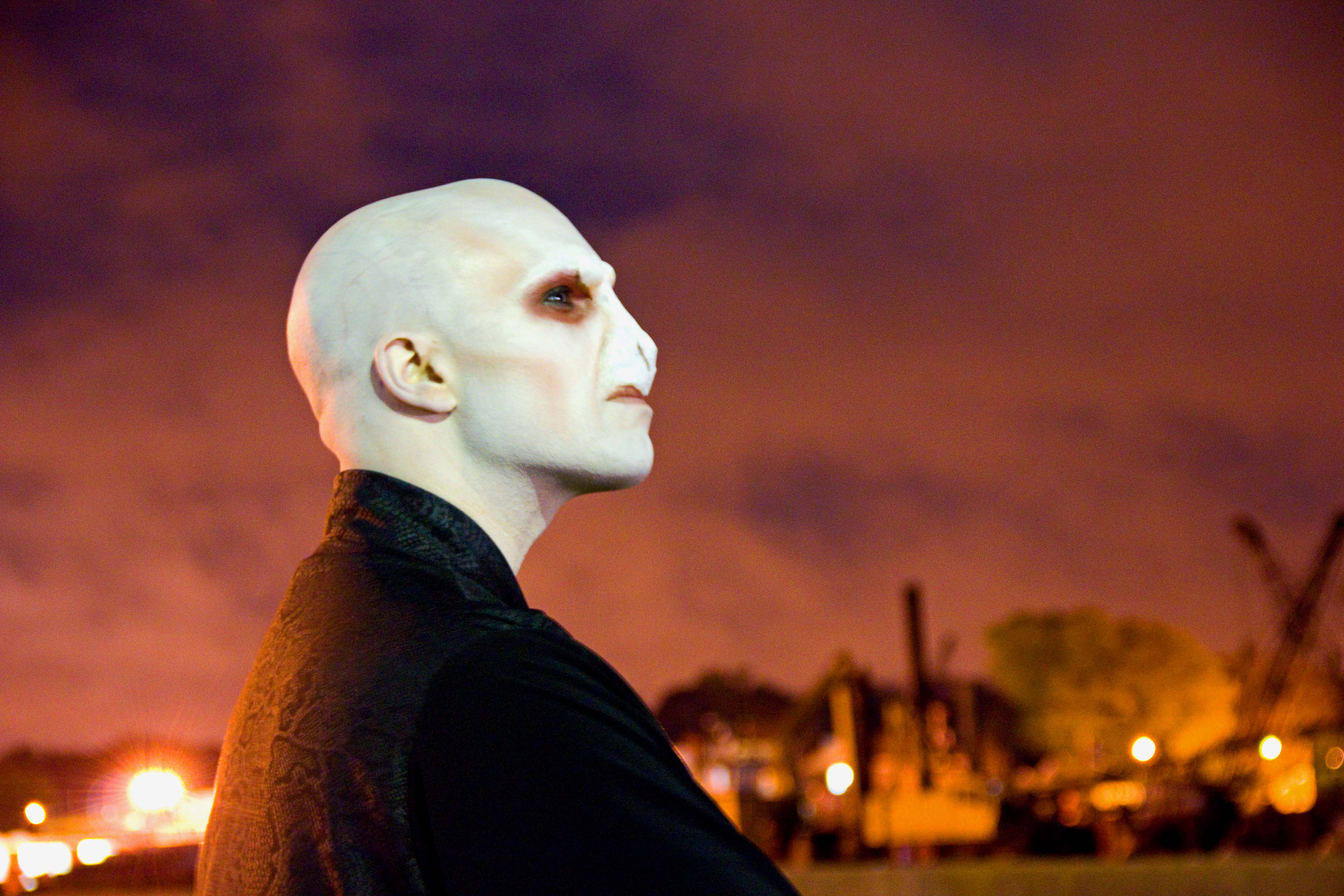 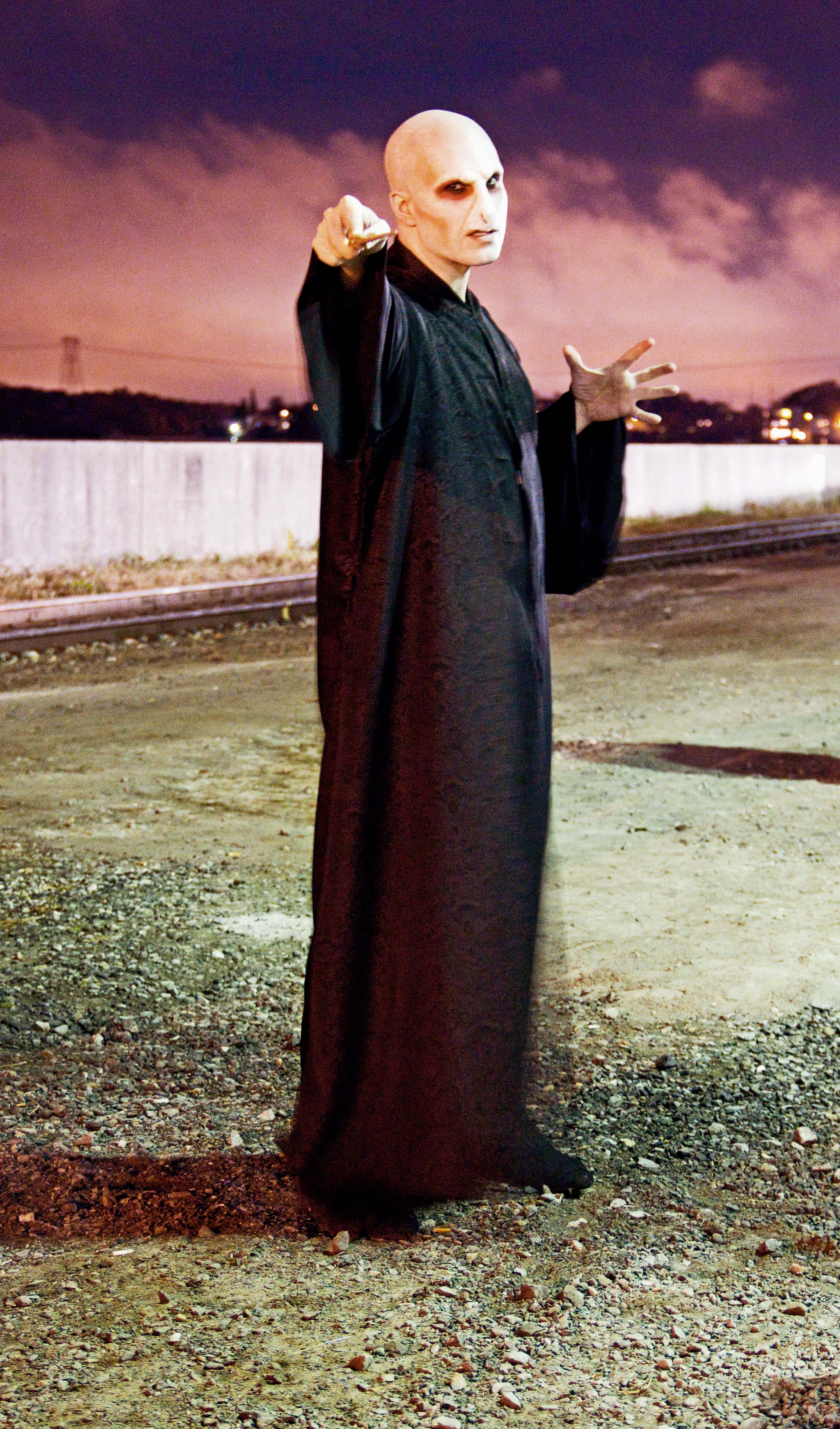 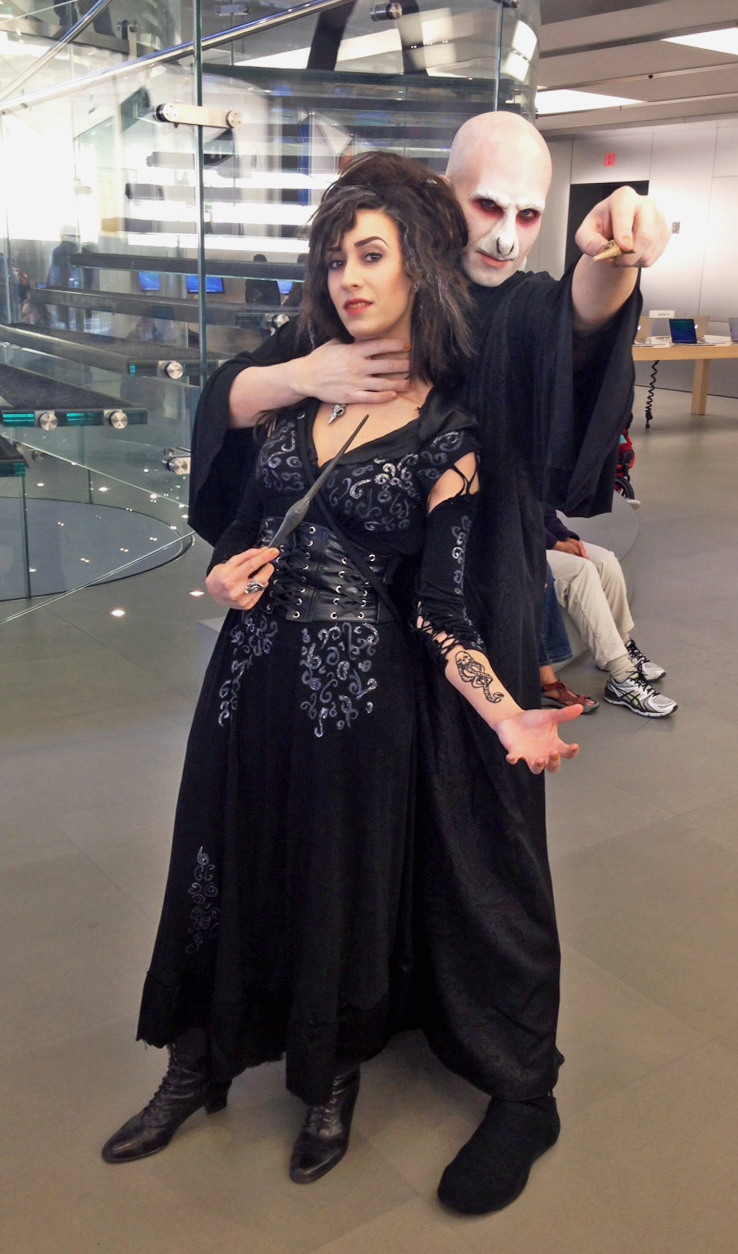